Your gift matters! It will shape the future of the museum.

The Samuel Slater Experience will tell Slater’s Oxford, Dudley and Webster story. We intend to bring Samuel Slater and this rich industrial history of the area back to life. 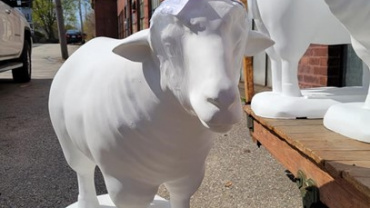 Join us as we parade 25 colorfully decorated life-sized sheep along our streets and in our lobbies, each painted by a local artist and “owned” by a local business, association, or individual.

Why Samuel Slater; Why in Webster?

Samuel Slater became involved in the textile industry at the age of 14 and completed a seven year long apprenticeship in the “art of cotton spinning.” He left his home country of England in 1789, and came to Pawtucket, Rhode Island to start his own cotton spinning business. In 1812, he moved his mills north, to what is currently known as Webster, Massachusetts. It is all thanks to Samuel Slater for the creation of Webster, forged from the neighboring towns of Oxford and Dudley, with the help of his friend, the famous Senator Daniel Webster. Unfortunately, most of this history has faded from current memory.

By using the water power of Webster Lake and the French River, Slater was able to create an industrial town centered on cotton and woolen manufacturing. He and his family were central to the growth of Webster into an industrial giant that attracted other businesses to the area. Slater would go on to build the first Sunday School in the area, across the street from the mill, for the education of the children who were employed at the mill.

Help by donating today and your proceeds will shape the future of the museum!

Thank You to our Major Supporters

This Pop-up Is Included in the Theme